People First. It's why we're consistently recognized by clients, the legal profession, and the media as one of the top law firms in the region.

Kean Miller was selected as one of three recipients of the Chevron Corporation Law Function's Law Firm Diversity Recognition Award. The award program, started in 2005, recognizes Chevron's law firm partners who have distinguished themselves by demonstrating their commitment to diversity in the legal profession and by fostering an inclusive work environment. Kean Miller's diversity and inclusion efforts were also recognized by Chevron in 2008, 2010 and 2017.

Kean Miller was recognized by the National Law Journal in its inaugural NLJ 350 section, a listing of the Top 350 law firms in the United States. The article profiles the firm's unique culture and client-centric growth strategy.

Kean Miller has been recognized as a "Go-To" law firm in Louisiana by in-house counsel at major Fortune 500 companies for the past 10 years. The "Go-To Law Firms" list is compiled from a survey of Fortune® 500 in-house lawyers and is conducted by Corporate Counsel magazine. Only the law firms that meet the strict requirements of the Fortune 500 clients they serve are appointed. No law firm can request to be listed and less than one-half of one percent of all of the law firms in the U.S. and abroad are included.

Kean Miller has been ranked in the 2019 U.S. News and Best Lawyers "Best Law Firms" list. The firm is recognized regionally in 36 practice areas, and nationally in 3 practice areas. Firms included in the 2019 "Best Law Firms" list are recognized for professional  excellence with repeatedly impressive ratings from clients and peers. Achieving a tiered ranking signals an exclusive combination of quality law practice and range of legal expertise. Ranked firms, presented in tiers, are listed on a national and regional based scale. Receiving a tier designation reflects the level of respect a firm has earned among other lawyers and clients in the same communities and the same practice areas for their abilities, professionalism and integrity.

Fifty-five Kean Miller attorneys (36%) are AV-rated by the Martindale-Hubbell legal directory. An AV-rating reflects the confidential opinions of bar members and the judiciary, and attests to the individual attorney's legal ability and adherence to professional standards of ethics. The Martindale-Hubbell AV-rating indicates very high to preeminent legal ability and very high ethical standards as established by confidential opinions from members of the bar.

Thirty-three Kean Miller attorneys are listed in the 2019 edition of The Best Lawyers in America. Published biennially since 1983, The Best Lawyers in America is widely regarded as the preeminent referral guide to the legal profession in the United States. Compiled through an exhaustive peer-review in which thousands of the top attorneys in the U.S. confidentially evaluate their professional peers, the current edition of Best Lawyers is based on more than 4 million detailed evaluations of attorneys by other attorneys.

Twelve Kean Miller attorneys are listed in the 2019 edition of Chambers USA - America's Leading Business Lawyers. Chambers is widely regarded as the preeminent European referral guide for the U.S. legal profession. Compiled through exhaustive surveys with over 4500 attorneys from Maine to Hawaii, the guide is based solely on market recommendation. Researchers spend one year canvassing clients and lawyers across the U.S. to obtain a consistent market view of which firms and attorneys are considered leaders in their field.

Twenty-seven Kean Miller attorneys are listed in the 2019 edition of Louisiana Super Lawyers. The publishers strictly adhere to a rigorous selection process by verifying and validating all data submitted by attorneys and law firms.

The Louisiana State Bar Association has recognized Kean Miller with its Human Rights Award. The award recognizes the firm’s many contributions in promoting diversity and inclusion in the legal profession, including the Kean Miller Connection program.

Kean Miller and the Kean Miller Connection were recognized at the Louisiana State Bar Association Conclave on Diversity in the Legal Profession CLE. The "You Make a Difference" award was presented to the firm in recognition of our efforts to make the legal profession more inclusive, accessible and professional.

The National Legal Aid and Defender Association, America’s oldest and largest non-profit association devoted to the delivery of pro bono legal services has awarded the Beacon of Justice Award to Kean Miller. The annual award recognizes law firms that have devoted significant time and resources to pro bono appellate representation.

Kean Miller attorneys have strong academic backgrounds. More than 40 have been elected to the Order of the Coif, the highest academic honor awarded in law school. Many have served as editors-in-chief, editors and staff writers of the Louisiana Law Review, Southern Law Review, Tulane Law Review and Loyola Law Review. Many attorneys have served, or presently serve, as Adjunct Professors at the LSU Law Center, Southern University Law School, Tulane Law School, and Loyola Law School. 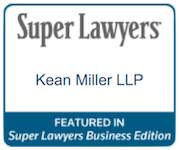